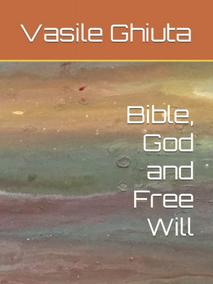 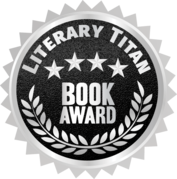 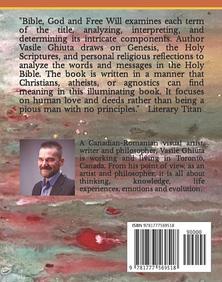 ​​vasile ghiuta
vivid imagery of emotions through the art of PAINTING

The oldest questions man has asked himself are: "how did he appear on earth" and "what is the meaning of his existence?" Some theories try to answer these two fundamental questions, but neither covers the complexity of this problem.

In this book, I ask myself the same questions without claiming to find an answer that everyone fully accepts. There are two major theories about man's appearance on earth: the Creationist and the Evolutionist. I believe that the two theories are not contradictory because one does not exclude the other. From my point of view, it is an inclusive relationship between them in the sense that the Creationist Theory contains the Evolution Theory. Creation does not impede evolution, on the contrary, creation "needs" evolution; the existence of time implies change and implicitly the perfection of man.

In this book, I try to present, in four parts, my opinion on certain aspects of the Bible, God, and Free Will.

In the Bible section, I show how I interpret certain contradictory aspects of the Bible, with particular emphasis on Genesis, as well as "time," "morality," and "God."

In the second part, I present my vision of the existence of God and the theories that support His existence. I set out my vision on the relationship between God and Man, emphasizing the ontological and metaphysical aspects. An important part is my view of the "salvation" of men and how this can be accomplished by analyzing biblical and patristic texts. I have tried to explore the "dialogue" between man and God as an exchange of compatible "energies" between two similar entities.

The third part of Free Will deals with how the free will of men influences the relationship of "communication" between God and Man. Here, I deal with the part of the Book of Genesis concerning original sin. My personal opinion about the “guilt” for this sin is that it should be shared by both of them: Man and God.

The last part refers to the conclusions I drew from my inner introspections and after reading some biblical, theological, and ecumenical works.

This book treats the above aspects without representing any religious doctrine. It is a philosophical book which presents sensitive topics such as the Bible and God without intending to offend any religious cult. My view on some issues may be similar to Christian dogma. Of course, my Christian background may influence how the conclusions were polished, but my science education is prevalent. It should be seen and interpreted as a personal vision rather than a "religious" book.

I tried to write it in a way that everyone could understand. “Bible, God and Free Will” is addressed to all: believers, agnostics, and atheists. It aims to open the way to free thought and not be bound by ideology or doctrine patterns. I wish the readers to ask themselves questions and look for answers to each person's fundamental issues.

★★★★ "What a great book!" - Literary Titan"Bible, God And Free Will examines each term of the title, analyzing, interpreting, and determining its intricate components. Author Vasile Ghiuta draws on Genesis, the Holy Scriptures, and personal religious reflections to analyze the words and messages in the Holy Bible.The book is divided into four parts, with the first three used to enlighten on the Bible, God, and Free Will. The fourth part - conclusions - presents the summation and overview of the key components of the ideas and beliefs discussed in the first three parts.This first part of the book examines the Old and New Testaments, shedding light on their origins, evolution, and content. Questions such as 'Can atheists and believers alike comprehend the complexity of messages in the Bible or is it altogether out of human understanding' constitute the basis for this section. Furthermore, the author attempts to decipher the important book of creation, Genesis; on what day He created the universe, the human, the soul, the heavens, and angels, or was the day really bound by temporality? Finally, part one finishes with the concept of time and morality.The second part continues the elaboration on God as a creator, and energy, with a comprehensive and thorough interpretation of God in both the old and new testaments. It explores the relationship of God to humans, the three hypostases of the Holy Trinity, and the value of love of humans expressed towards others and in deeds as the supreme expression of God.A key component of part three deals with Man's free will, endowed by God with the authority to decide and put God within him by relating both human and divine will. This part concludes with a new perspective on sacrifice in light of Jesus' sacrifice, which brought upon death as a stage for mankind's eternity.This thought-provoking book sets forth logical, comprehensive, and coherent explanations of a vast array of enigmatic topics through philosophical interpretations of different concepts from the Bible. For example, one of the author's claims is that social behavior toward God's creatures, even in the absence of trust in God, is fully capable of bringing one salvation. While some points in the book seem to have been repeated, the repetitions emphasize the might of God and his message of life - love.Bible, God And Free Will is written in a manner that Christians, atheists, or agnostics can find meaning in this illuminating book. The book focuses on human love and deeds rather than being a pious man with no principles." LITERARY TITAN